You can get food poisoning from rice if you don’t store it in the fridge after cooking.

What makes you sick is the bacteria Bacillus cereus, says CSIRO food microbiologist Cathy Moir. These bacteria produce toxins that will give you a mild vomiting illness shortly after you eat the contaminated food (sometimes it only takes 30 minutes to get sick).

Bacillus cereus is commonly found in the soil and sometimes in plant foods that are grown close to the ground – such legumes, cereals, spices etc… and it reproduces in cooked rice millions by teh second if lefted at room temperature.

If foods are cooked and handled correctly Bacillus cereus isn’t a problem, but in dry conditions – such as those found in a rice packet or spice container – Bacillus cereus remains present as spores. The spores remain dormant until you add water, then presto they germinate and grow.

Unfortunately the cooking process doesn’t kill the heat-resistant spores or the toxin produced so once the rice is cooked the bacteria grow and thrive in moist, warm 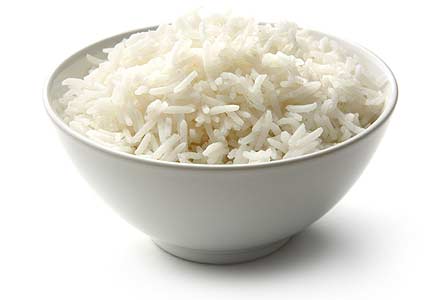 so if you go to an event and you see rice  not refrigerated or heated while waiting to be served…do not eat it!