Karimah Bint Dawoud, qualified clinical nutritionist and award winning writer ” Heavenly Bites  the Best of Muslim Home Cooking” Kube Publishers
1038 years ago was born an amazing boy that was to become one of the most famous and respected  polymaths and fathers of modern medicine, Ibn Sina  also know in the west as Avicenna

His correct Islamic name was and is Abu Ali Sina. He  was Persian: ابن سینا‎; c. 980 – June 1037) As a polymath who is regarded as one of the most significant physicians, astronomers, thinkers and writers of the Islamic Golden Age.

He has been described as the father of early modern medicine. Of the 450 works he is known to have written, around 240 have survived, including 150 on philosophy and 40 on medicine.
His most famous works are The Book of Healing, a philosophical and scientific encyclopedia, and The Canon of Medicine, a medical encyclopedia[11][12][13] which became a standard medical text at many medieval universities and remained in use as late as 1650.

In 1973, Avicenna’s Canon Of Medicine was reprinted in New York.
Besides philosophy and medicine, Avicenna’s corpus includes writings on astronomy, alchemy, geography and geology, psychology, Islamic theology, logic, mathematics, physics, and works of poetry.
He turned to medicine at 16, and not only learned medical theory, but also by gratuitous attendance of the sick had, according to his own account, discovered new methods of treatment. 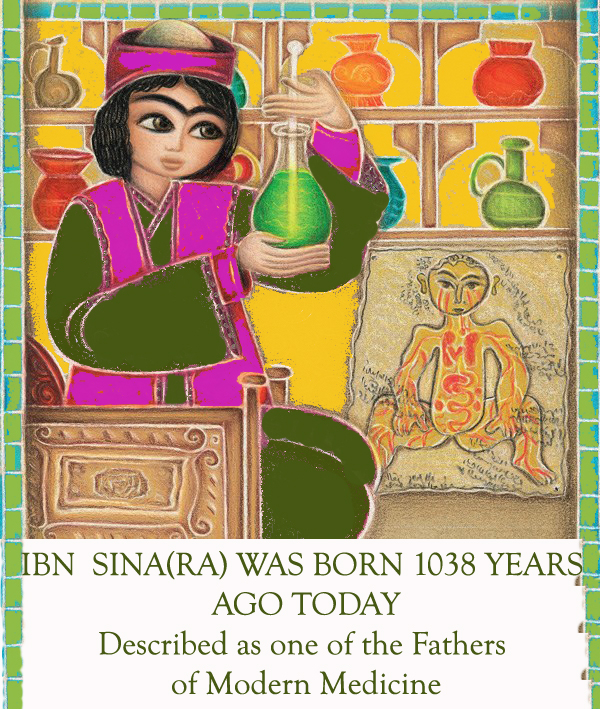 The teenager achieved full status as a qualified physician at age 18, and found that “Medicine is no hard and thorny science, like mathematics and metaphysics, so I soon made great progress; I became an excellent doctor and began to treat patients, using approved remedies.” The youthful physician’s fame spread quickly, and he treated many patients without asking for payment.

To this day Sunni and Shia Muslims want to claim him as part of their tribe, Allah knows best.

One thing that is sure, he is an inspiration for every young person to know that doing your homework and studying not only at school but at home and from God fearing knowledgeable you meet is a good way to find success in this life and the next in shaa Allah.